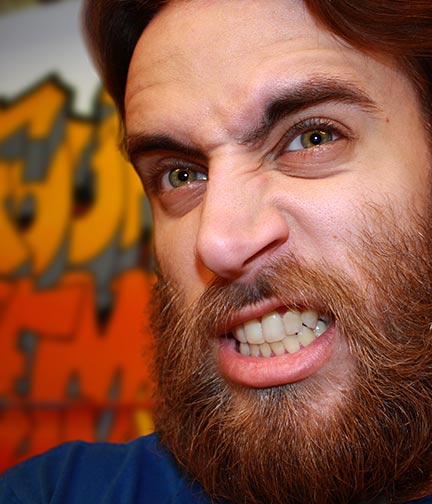 Alex Gebaur is an award winning web & graphic designer with 17+ years of experience in the field of design.

He is a total perfectionist. Especially when it comes to work. His art work is influenced by urban letterforms and styles of graffiti. Also, having a background in painting has contributed to his graphic design by use of color application and style. He also loves the logic and structure of coding and always strives to write elegant and efficient code, whether it be HTML or CSS. His greatest expertise revolve in the worlds of web design, animation, brand identity, illustration and print collateral.

From a young age painting was an outlet for expressing his creativity and imagination. At the age of three, he expressed himself by taking his fathers paint brushes and used the floor as a coloring book. On a mission to let the world know he was ready to paint it.

Alex comes from four generations of artists/sign painters. Often admiring his father and grandfathers old school painting technics, the "back in my day, we didn't have computers" type of design work. The vibrant colors and unique style of letters created by his father and grandfather became a source of inspiration, which evolved into his passion for all things design and typography.

Graduated from the The Creative Center in Omaha, NE. A private art college with emphases on constructing a well rounded portfolio. Some of his accomplishments include a 2006 Silver ADDY, Mytoons.com featured animation & commercial, and 1st place in group marketing campaign for Domino Sugar.